You are here: Home1 / Printing in Hospitals

Printing in hospitals is often related to considerable problems and high expenditure of time. Staff members who often change their location in the course of the day have to log off the system and log in again in order to be able to use the printer on the respective ward. Moreover, at each modification of the printers themselves, the administrators have to change the UNC path and store it for all users.

With steadyPRINT, hospital employees can use the nearest printer, no matter where they are, while IT administrators can manage the IT environment via a single console.

Special printer for HIS systems

VPD vName: The solution for HIS-systems.

With the Virtual Printer Driver (VPD), steadyPRINT offers its own virtual printer driver with numerous applications. Based on this, a virtual printer type – the steadyPRINT vName printer – has been developed especially for hospital information systems.

The printer management is outsourced from the special application and implemented into a graphical and easy-to-use management console, the steadyPRINT Center. The administrator stores a virtual vName printer that can have any name in the Center. During the assignment, a local printer with the name of the virtual vName printer is created on the respective computers. For the previously created virtual vName printer, assignments are now created to physical printers on the basis of computers, users, groups, folders, MAC addresses and organizational units. The virtual printer is now assigned to each workplace without indicating the UNC path.

Users always select this specific printer, no matter where they are, and do not have to think about which printer they are connected to. 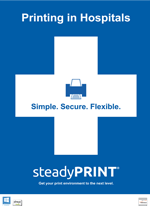 Define IP ranges for different departments or locations. An IP filter can be created on print server, folder or printer level. During a change of location, all printer connections and default printers are automatically and immediately adapted to the respective IP range

Select the printer of your choice and use the app on your smartphone (iOS or Android) to start your print jobs. Stay flexible and avoid confidential documents being read at the printer.

On the one hand, steadyPRINT provides you with all default information of a printer, on the other hand, however, you can access manufacturer-specific data, e.g. toner or paper status, fixing stations, printed color or black-and-white pages, copies, maintenance or leasing data and many more. This data is clearly displayed in the dashboard.

Moreover, thresholds for warnings and errors can be defined. This way, you can for example have automated e-mails being sent to your purchase department at a certain toner level, inform the controlling department as soon as a specified number of printed pages is reached or notify your technical support of an error.

Create reports that give you a simple overview of your environment. Have, for example, the average printing costs or devices with frequent error messages displayed. Reports can automatically be created and exported into different formats and sent by e-mail at set times. steadyPRINT offers a series of possible reports from the different categories.

Furthermore, the report designer enables you to generate individual reports. Have all important data be displayed in the way you need it.

What to do in case of a print server failure?

In case of a print server failure, all printer connections are transferred from the master to the backup print server. Without the use of steadyPRINT, the UNC path changes and printing is no longer possible. The printer has to be reassigned with the modified path.

The use of steadyPRINT vName avoids this problem as in HIS itself only the virtual vName printer is stored which does not change even during the transfer to the backup print server. The change is (automatically) done in steadyPRINT. In the end, the users do not notice this process and can continue working without interruption.

Furthermore, even printer, user and driver migrations can be performed. Not only printers but also printer connections of the users or even the drivers can be switched to the new print server.

Similar to a print server failure, a printer might not be accessible due to maintenance or the exchange of old devices. In steadyPRINT, all respective assignments will be switched to an alternative printer or the new printer so that the workflow will not be disturbed. In the same way, all printer drivers can be maintained centrally and easily via the steadyPRINT Center.

This website uses cookies to improve your experience while you navigate through the website. Out of these, the cookies that are categorized as necessary are stored on your browser as they are essential for the working of basic functionalities of the website. We also use third-party cookies that help us analyze and understand how you use this website. These cookies will be stored in your browser only with your consent. You also have the option to opt-out of these cookies. But opting out of some of these cookies may affect your browsing experience.
Necessary Always Enabled
Necessary cookies are absolutely essential for the website to function properly. This category only includes cookies that ensures basic functionalities and security features of the website. These cookies do not store any personal information.
Non-necessary
Any cookies that may not be particularly necessary for the website to function and is used specifically to collect user personal data via analytics, ads, other embedded contents are termed as non-necessary cookies. It is mandatory to procure user consent prior to running these cookies on your website.
SAVE & ACCEPT